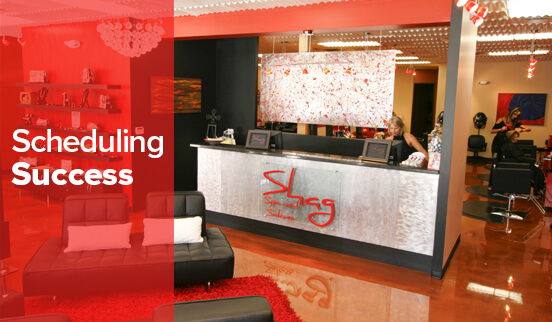 According to Natasha and Fred Klages, owners of Shag Spa and Salons in The Woodlands, Texas, running a salon is about managing people. Clients, vendors, and staff all need to interact on a continual basis for business to be conducted smoothly. And, as any salon or spa owner like the Klages can tell you, running a service-oriented business starts with organization and effective scheduling.

This business-savvy duo goes on to explain just how they’ve managed to get their scheduling down to a science through the use of salon management and scheduling software. Here’s how their journey unfolded:

The Klages started their primary location in 2008 in The Woodlands, Texas, expanded the facility a year later and then added a satellite location inside of a local resort years later. With chairs between the two locations and over 60 service providers with a diverse and growing clientele, they quickly saw the need to find salon scheduling software to help them manage their business.

According to Natasha and Fred, back then, most salon-specific software offerings were client server based, which means that you license software and any updates, install it yourself on your own system or server and then manage all aspects of IT from there.

“We ended up spending a significant amount of money in licensing and re-licensing fees with what we found to be an outmoded arrangement that really wasn’t effective for us.  What we actually wanted was software that was web-based, that way we could manage our business remotely as needed,” stated Fred.

Necessity is the Mother of Invention

Frustrated with the lack of innovative software offerings at the time, the Klages put Fred’s tech background to use and began the process of writing specifications to start their own software company.  Once about 20 to 30 percent of the specifications were done, they began to shop the project around for possible development. Based on what they had budgeted, the Klages found that they would be forced to take the project offshore to see it realized.

“We were uncomfortable with the potential intellectual property (IP) theft for which some countries were prone,” said Fred.  “Anytime you go overseas with software development, you have to realize that there are different laws and interpretation of those laws for IP and it can get messy very quickly, not to mention expensive to fight down the line.”

Doing all of this research led Natasha and Fred to a US-based startup software company with offerings that were designed by Jim Bower, a salon owner like the Klages.

“Rosy Salon Software was cloud-based and had some of the core functionality that we had outlined in our specifications,” Fred added. “It offered us a flexible platform that supported multiple merchant accounts, which almost none of the other packages at the time had.  Being a hybrid salon with a combination of commission and rental service providers, we needed a system that was scalable and could handle 35-40 separate merchant accounts with the option to add as many more as we wanted down the line.”

He continued, “Long story, short; we opted to go with this new company instead of spending the time and effort to develop our own software. We completely understood Jim Bower’s vision and appreciated his team’s foresight, so we abandoned our existing software package and went with Rosy, instead.”

Usually, a huge concern when switching software, Natasha and Fred successfully transferred their salon and spa data and then began integrating Rosy into the everyday management of their salons. In the years ever since the Klages feel that scheduling and overall salon management has become quite simplified and very turnkey. Better yet, they have been able to work remotely, which has been hugely productive for them and their service providers.

“Most of the time it’s just a matter of tapping an icon on a mobile screen to access what you need. You can look at whichever schedules you want, check inventory, run reports, pretty much whatever you want from anywhere you want,” Natasha said.

Fred adds, “The mobile capabilities were the main reason that we ended up aligning ourselves with Rosy, as we knew that for software to be effective for us, it had to be web-based. One of the other of many benefits is the online client scheduling. Clients can book their own appointments as their timing permits through a link on our salon website. It’s a convenience our customers appreciate and a time-saver for our front desk staff. And the product recommendations both here and at checkout have helped bump up our retails sales even further.”

“As an early adopter with Rosy, we credit Jim Bower and his team for having the vision to see that this mobile society that we live in, specifically the think-outside-of-the-box hairdresser, was going to be the ones to embrace it fully …and he was right. When it comes to salon and spa software, we have found that scalable, cloud-based mobility really is the way to go,” Fred said in closing.

To provide full-featured salon and spa management Software as a Service (SaaS) to the beauty industry that leverages the latest technology and allows users to build deeper relationships with clients while increasing their revenue and profitability.

Come see us at
America's Beauty Show
×
Learn More
CHICAGO, MARCH 21 - 23
We're so sure
you'll love it,
the first 30 days
are on us!
×
Start your free trial now!
Your New Salon
Website Creator:
×
Create your new salon site today!
Affordable, Easy,
and Gorgeous!